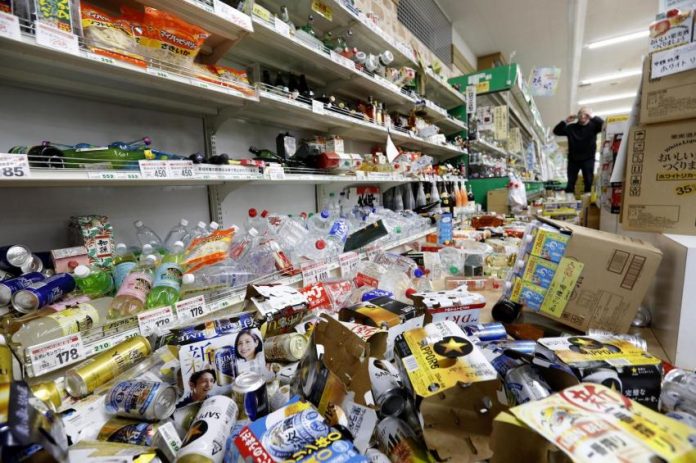 A strong 6.7 magnitude earthquake rocked Japan Tuesday night, sparking a tsunami advisory that was later lifted with no reports Wednesday of major damage. At least 26 people were injured.

The Japan Meteorological Agency had warned Tuesday that a wave of one meter could hit the coast of the Sea of Japan, but only small ripples of 10 centimeters were recorded.

The agency cancelled the tsunami advisory around two and a half hours after the quake.

The earthquake, which struck at 10:22 p.m., registered 6.7 on the Japanese scale, and was felt in the capital, which is more than 300 kilometers away.

The U.S. Geological Survey put the magnitude of the quake at 6.4.

Prime Minister Shinzo Abe told reporters his government would be “on the maximum alert” to prepare for possible rescue operations in the region and warned citizens to be vigilant for strong aftershocks.

In Niigata, a man in his 30s fell down and broke a bone, a woman in her 60s fell from her wheelchair and sustained light injuries, and two others were also lightly injured, the prefecture’s disaster management department said in a statement.

The earthquake struck at a late hour in mainly sparsely populated areas so it was not easy to evaluate the damage immediately.

Witnesses cited by national broadcaster NHK said they experienced strong shaking that knocked some books off shelves and moved some furniture. The broadcaster showed images of some cups and glasses smashed on the floor of a restaurant.

Officials immediately stopped bullet train services in the region as a precautionary measure, but resumed operation from Wednesday morning, according to NHK.

An agency official told an emergency news conference that residents in the region should stay vigilant as “a sizeable earthquake may occur again.” The official also warned that bad weather was forecast in the region, which could potentially trigger landslides.

NHK aired footage showing an elementary school ceiling collapsing onto the ground, and small scale landslides in some towns and near railways.

There were multiple small aftershocks after the main quake. Some local roads were also closed.

Japan sits on the Pacific “Ring of Fire”, where many of the world’s earthquakes and volcanic eruptions are recorded.

On March 11, 2011, a devastating 9.0-magnitude quake struck under the Pacific Ocean, and the resulting tsunami caused widespread damage and claimed thousands of lives.

Niigata itself has a history of large earthquakes. In 2004, a 6.8-magnitude quake hit, killing 68, including elderly people who died in the days and weeks after the first tremor from stress and fatigue. The area was also hit by a magnitude-6.8 quake in 2007, leaving 15 people dead.